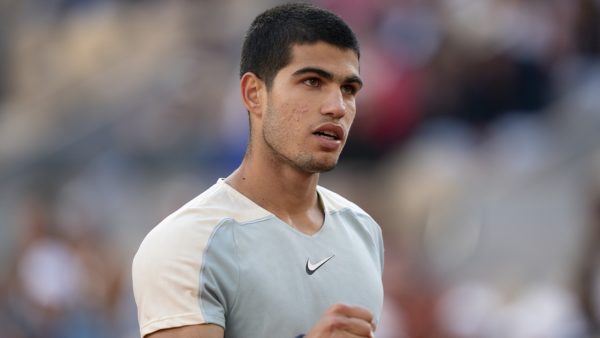 May 31, 2022; Paris, France; Carlos Alcaraz (ESP) reacts to a point during his match against Alexander Zverev (GER) on day 10 of the French Open at Stade Roland-Garros. Mandatory Credit: Susan Mullane-USA TODAY Sports

Carlos Alcaraz defeated Jannik Sinner in an epic match at the US Open on Wednesday, and the perfect photo was captured to accompany the feat.

Alcaraz came from down two sets to one to beat Sinner and advance to his first ever major semifinal. The match lasted more than five hours. After it was over, an incredible photo was captured that made it look like the 19-year-old was breathing a US Open logo fireball.

That is a framer, for sure.

The 5-hour, 15-minute match was the second-longest ever at a US Open. Alcaraz, the No. 3 seed, treated fans to the best shot of the tournament (video here). He has now helped produce the best photo of the tournament, too.