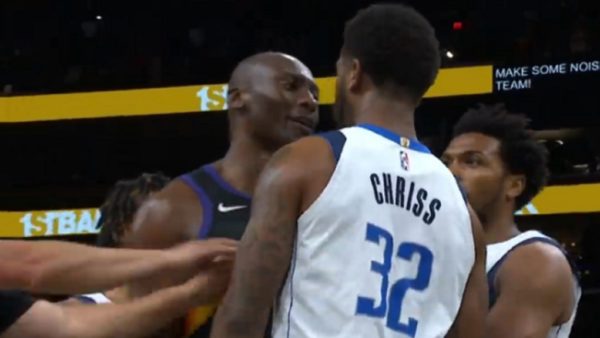 Bismack Biyombo and Marquese Chriss had to be separated in the locker room tunnel at the end of Game 5 on Tuesday night between the Dallas Mavericks and Phoenix Suns.

Biyombo went for a dunk attempt with 2.3 seconds left and his Suns up 108-80. Chriss didn’t like seeing Biyombo try to add to the big lead and gave him a hard foul.

Bismack Biyombo and Marquese Chriss were ejected after Chriss appeared not too happy with Biyombo attempting a dunk with about 3 seconds remaining. @JGSports_6 heard Chriss say "That's bull (expletive)" multiple times before Biyombo got in his face. #RallyTheValley #NBA pic.twitter.com/WBUcCK032p

The players were called for technical fouls and ejected.

Then Chriss was seen going after Biyombo in the tunnel to the locker rooms. The players had to be separated.

Chriss was obviously frustrated about his team losing by 30 and didn’t want to see Biyombo get a cheap dunk at the buzzer.