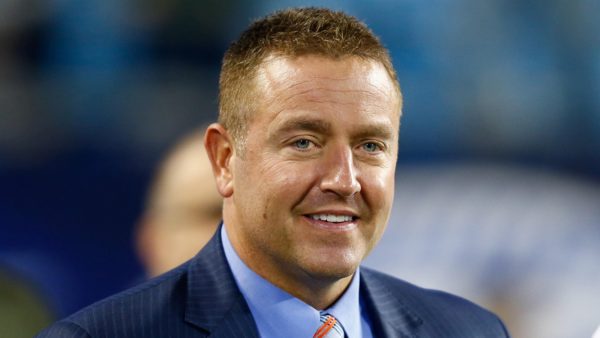 Dec 2, 2017; Charlotte, NC, USA; ESPN personality Kirk Herbstreit walks down the field prior to the game between the Clemson Tigers and the Miami Hurricanes in the ACC championship game at Bank of America Stadium. Mandatory Credit: Jeremy Brevard-USA TODAY Sports

Will Muschamp hit Kirk Herbstreit with what many viewed as a lighthearted jab earlier this week, but it does not sound like the former Ohio State quarterback interpreted it that way.

Muschamp is the co-defensive coordinator and safeties coach for Georgia. His Bulldogs are getting set to face Ohio State in the College Football Playoff semifinal at the Peach Bowl on Saturday.

The only other time the two teams met was in the 1993 Citrus Bowl (for the 1992 season) when Georgia beat Ohio State 21-14. Muschamp was a safety for that Georgia team, while Herbstreit was the Buckeyes’ quarterback.

Muschamp was asked by a reporter on Tuesday if he has any specific memories from the ’93 game. He recalled a luncheon leading up to the game where Herbstreit made a bad pass across the room. Muschamp said it was at that point that he knew Georgia would win.

Herbstreit was later asked if he had any response to being trolled by Muschamp. He said he recalls what Muschamp was talking about and explained that the football he threw was a collector’s edition that was difficult to grip.

“I do remember it was one of those autographed balls, those white panel balls,” Herbstreit said. “And I remember throwing it and not being real happy with how far I had to throw it because I couldn’t grip the ball. So I shot putted the ball. That’s about all I remember. But no, I don’t really have any comments or any reaction at all to what Will said.”

Herbstreit added that he doesn’t remember much about Muschamp from that Georgia team.

“Was that 100 years ago?” he asked. “… So I just remember Georgia being really good and very athletic, and I don’t remember much about Will at all.”

Seems like Herbstreit doesn’t have a sense of humor about the 92 Citrus Bowl. Seemed like Muschamp’s comments were meant jokingly pic.twitter.com/w6IlptdnOH

Lighten up, Herbie. Muschamp was obviously joking. We highly doubt anyone actually drew conclusions from the way Herbstreit threw a football during a luncheon. Obviously, the moment has stuck with Herbstreit and Muschamp struck a nerve.

Herbstreit played at Ohio State from 1989-1992. He was the team’s starting quarterback for that ’92 season and passed for 1,904 yards, four touchdowns and six interceptions. The team was very run-heavy and led by running back Robert Smith. Future Heisman Trophy winner Eddie George was a freshman that year, so Herbstreit did not have to do much heavy lifting.