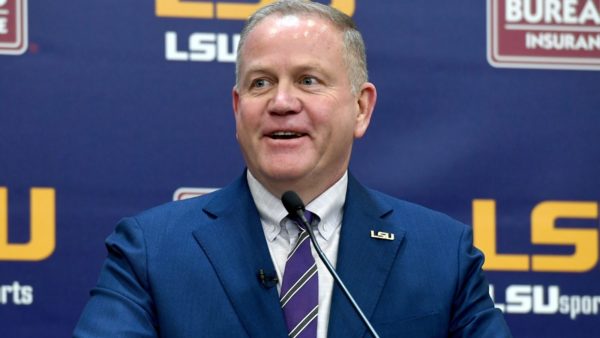 LSU fans rushed the field at Tiger Stadium in Baton Rouge after the team’s huge win over Alabama on Saturday night. But those fans did not mess with the goal posts. There was quite a deterrent standing in the way.

SI’s Ross Dellenger shared a photo on Twitter of the security guard standing in front of one of the goal posts. The man was quite a wide load, and not someone who would be moved too easily.

No one is messing with the goal posts pic.twitter.com/D7k8YZCLyq

LSU fans sure had their fun, but without removing the goal posts, unlike after Tennessee pulled the upset over Alabama.

The Tigers went for a 2-point conversion in overtime and completed the pass to pull off the 32-31 overtime win, sending both teams to 7-2.

Alabama had barely escaped a similar situation against Texas A&M a month ago. This time around, they weren’t so lucky.