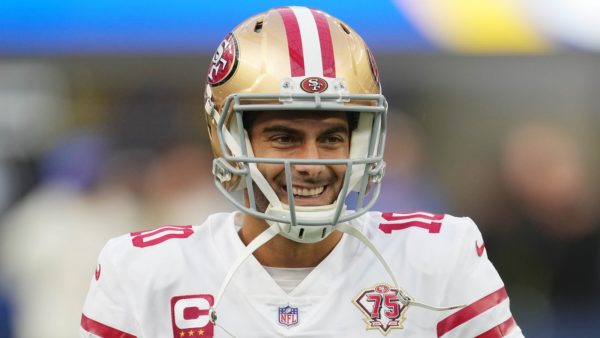 It was only a few short months ago that the San Francisco 49ers were openly looking to trade Jimmy Garoppolo, but the course of their season has changed dramatically. That has led to questions about whether Garoppolo could remain with the Niners in 2023, and the team apparently has not ruled that out.

Garoppolo and the 49ers have mutual interest in the veteran returning to San Francisco next season, Ian Rapoport of NFL Media reports. It is unclear if there is a scenario where Garoppolo would be given assurances that he would be the starter over Trey Lance.

The 49ers were fully committed to Lance throughout the offseason. They made numerous attempts to trade Garoppolo, but they were unable to find a suitable deal after the 31-year-old underwent shoulder surgery in April. Rapoport notes that the team was appreciative of Garoppolo for the way he handled the situation when he could have easily demanded to be released.

Eventually, the Niners and Garoppolo agreed to a renegotiated one-year contract worth $6.5 million guaranteed. The deal includes incentives that could reach up to $16 million. There is also a clause that prevents San Francisco from placing the franchise tag on Garoppolo.

Lance entered the season as San Francisco’s starter, but he suffered a season-ending ankle injury in Week 2. Garoppolo took over and has gone 6-3 as a starter. The Niners have won four straight games heading into Sunday’s matchup with the Miami Dolphins.

Garoppolo has led the 49ers to two NFC Championship Games and a Super Bowl. He has shown once again this season that he is capable of winning games. It seems unlikely that he would remain in San Francisco as a backup behind Lance again. Both sides are probably content to see how the rest of the season plays out before making any decisions.