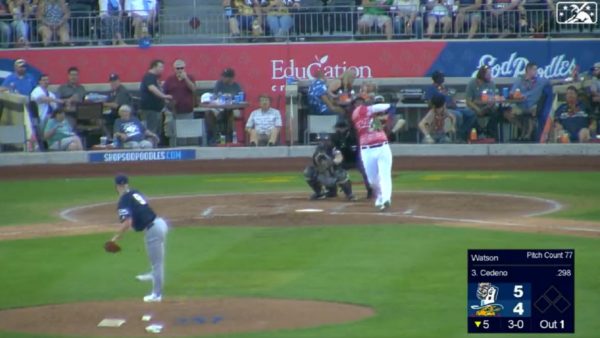 The Arizona Diamondbacks have one heck of a slugger in their pipeline.

Prospect Leandro Cedeno launched an absolute bomb on Saturday in a minor league game. The Double-A Amarillo Sod Poodles (seriously, that’s their name) first baseman was batting in the bottom of the fifth inning with his team down 5-4. He had a 3-0 count and decided to swing away. The result was an absolute bomb.

Take a look at this massive homer by Cedeno, which was estimated to have traveled 527 feet.

The @Dbacks infield prospect obliterated this ball for the @sodpoodles! pic.twitter.com/GHqtLFJV7e

That ball went across the street.

That was Cedeno’s 18th home run of the season. The 23-year-old is batting over .300 for the Sod Poodles.

They should get him in the MLB Home Run Derby.