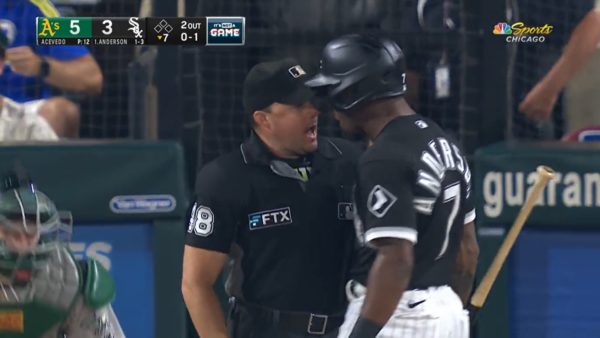 Tim Anderson might find himself in trouble with Major League Baseball after his reaction to a strike call in Friday’s game.

The Chicago White Sox shortstop was irate over a called strike in the seventh inning against the Oakland Athletics, and totally lost his cool. After being ejected by home plate umpire Nick Mahrley, Anderson got right up in Mahrley’s face and bumped him with the brim of his helmet.

Tim Anderson got ejected from the game after arguing this high strike call.

Anderson was UP in the ump’s face after he was ejected. pic.twitter.com/CZAbgSR9pe

The contact probably was not even intentional, but there’s a reason it’s strictly forbidden. If you’re close enough to an umpire during an argument that you can make contact, even accidentally, you’re already too close. He will likely be hearing from the league about this.

If it is any consolation to Anderson, at least one of his division rivals will probably sympathize when it comes to dealing with Mahrley.