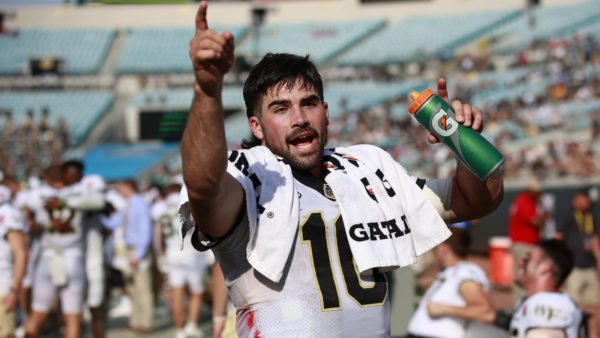 Everyone has a little something weird in the back of their refrigerator, but Wake Forest quarterback Sam Hartman has taken that to a new level.

Hartman missed the first week of the season due to a non-football medical issue. It was later disclosed that the fifth-year senior was recovering from a blood clot attributed to a condition known as Paget-Schroetter syndrome.

“After our diagnosis on August 9, we first did a procedure to remove the blood clot. Secondly, we performed surgery to eliminate the pressure on the vein and then dilated the vein,” Hartman’s surgeon said in a statement at the time.

As part of the two procedures, Hartman also had one of his ribs removed. And by now, we’re sure you can see where this is going.

Hartman revealed on Friday that he still has his rib, but it’s now in Tupperware in the back of his refrigerator. And he intends to keep it. Not only that, he intends to wear it.

Sam Hartman just revealed that he had to have a rib removed and he now has it in his refrigerator and plans to get it made into a necklace. Also he shaved his beard. This is all so disturbing.

Hartman shaving his beard doesn’t deserve to be compared to his rib necklace. That is next level weird and awesome all at the same time.

After returning in Week 2 against Vanderbilt, Hartman led Wake to a 6-5 record. He completed 63% of his passes for 3,421 yards, 35 touchdowns and 11 interceptions. Expectations are that he’ll soon declare for the 2023 NFL draft and wouldn’t it be incredible if he took the stage in April wearing his own rib around his neck?