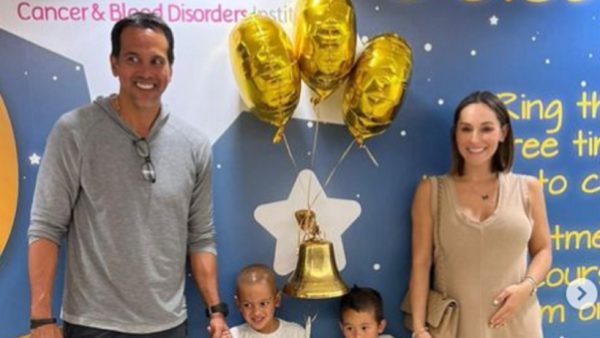 For Miami Heat head coach Erik Spoelstra and his family, the last several months have been a whirlwind. Their son, Santiago, was diagnosed with Burkitt lymphoma and immediately put into treatment one week after his fourth birthday.

This past Thursday, Santiago was proudly able to ring the gold bell at Nicklaus Children’s Hospital. And the family has announced that he is officially in remission.

“Our big boy got to ring the bell in the cancer wing at Nicklaus, and the gratitude I feel is overwhelming. Remission,” Santiago’s mother, Nikki Spoelstra, wrote on Instagram.

“My family and I are incredibly grateful to his pediatricians, the surgeons, the doctors, the nurses, the whole Child Life Team, and all of the staff at Nicklaus who took care of our boy… but also, our family. There were many tears but these special individuals all made sure that there were plenty of smiles and all the love and support to go around. There really aren’t enough words. Simply… Thank you.”

Despite the terrifying diagnosis, Santiago never lost his joy nor his hope. Now he’ll be able to return to his childhood, play with his friends and at least some degree, live without fear.

In addition to Santiago, the Spoelstras have another child, 2-year-old Dante, and are expected to soon welcome a third.